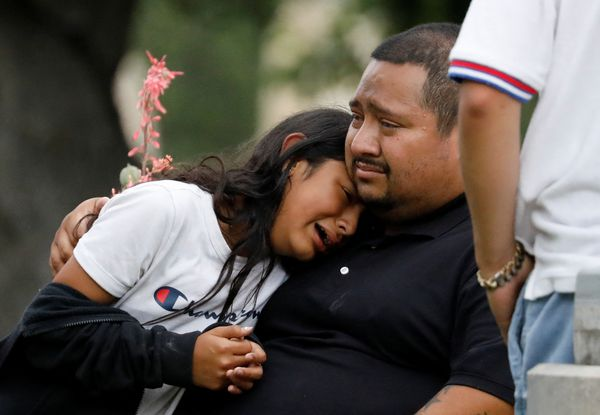 Image caption: 24 May 2022, Uvalde, Texas. People mourn outside Ssgt Willie de Leon Civic Center, where students had been transported after the shooting. Image credit to The Globe and Mail.

Words that are horrific as they seem, have lost their impact. The shock factor has simply dissipated as we witness these ghastly events again and again. For the citizens of Uvalde, Texas, this statement hit too close to home. On May 24, 2022, nineteen children and two adults were murdered at Robb Elementary School.

The shooter was identified as an eighteen year old high school student named Salvador Ramos. Before he began his attack on the school he posted a bone-chilling message to his private FaceBook account. “I am going to shoot my grandmother,” he began, later reporting, “I shot my grandmother.” Investigators found that the gunman had an online presence as an alleged school shooter, and often spoke about owning firearms on social media. Texas Department of Public Safety Director Steven McCraw stated, “In an Instagram post, the gunman said, ‘Ten more days.’” When another individual questioned the comment asking, “Are you going to shoot up a school or something?”, the gunman responded with “No, and stop asking dumb questions, and you’ll see.”

According to CNBC News, “The shooter legally owned two AR-15 style rifles, a Smith & Wesson M&P 15 and a Daniel Defense DDM4V7.” The weapons were purchased shortly after the gunman’s eighteenth birthday, a fact that he openly boasted about on social media. His grandfather gave a statement to ABC News stating that he was unaware his grandson had purchased rifles and stored them in the house. Prior to the event, the shooter did not have any criminal record. Shortly after grabbing his firearms, the shooter, who was reportedly wearing tactical gear, made his way into the building.

According to CBS News, the a brief overview of the most updated timeline of the events as shared by investigators are as follows:

At the forefront of the crossfire is law enforcement. The Texas Tribune reports that despite multiple 911 calls from the children trapped inside, police officers remained outside until a specialized team of federal officers arrived. When they finally made it to the scene it had been over an hour since the first shot was fired. McCraw responded to allegations from the media by stating, “It was the wrong decision, period. There’s no excuse for that.”

According to the Washington Post, police chief “[Pete Arredondo] in his role as incident commander, told officers to wait for backup and better equipment before rushing the classroom, despite protocols developed since the 1999 Columbine school massacre that say police should confront mass shooters as soon as possible.” Residents of the Uvalde community are at a loss with this information. Some believe that Arredondo did the right thing by keeping parents away from harm, but others are furious that immediate action was not taken.

Nineteen children and two adults died that day. Several others were wounded and remain in critical condition. Those who escaped the shooter did not do so without a lifetime of trauma; survivor 9 year old Daniel Ruiz escaped through a broken window, his cousin Ella Garcia was among the murdered.

According to information obtained from Associated Press, “Ellie Garcia’s funeral will be June 6 — the day after she was supposed to turn 10. Her family had been preparing a big birthday bash at her grandmother’s house this coming weekend. She had been hoping to receive gifts related to the Disney movie Encanto.”

During an interview with CNN, 11 year old Miah Cerrillo shares she is unable to sleep at night. While the interview was being conducted, a cell phone alarm rang, leaving Miah visibly on edge. In a statement to the press, her family states that these moments of unease have become the norm.

President Biden released similar statements, on June 2, 2022, by calling to Congress to ban assault rifles. Some excerpts from his speech are as follows:

“The issue we face is one of consciousness and common sense… I want to be very clear. This is not about taking away anyone’s guns. It’s not about vilifying gun owners.”

“Over the past two decades, more school-aged children have died from guns than on-duty police officers and active-duty military combined,”

Gun control, an issue embroiled in controversy for decades, has been swept under the rug for far too long. The lack of action has cost far too many innocent lives, and continues to pose a threat to the security of the nation. How many more youth should meet their end by bullet? How many more parents forced to grieve over the loss of their child? How long must families be forced to endure the reality that even the simple act of attending an educational facility is a possible death sentence? Are we as a society not beyond this chaotic frenzy of violence? Given our history, it seems we should be. Yet this is only an echo of a past tangled in controversy and tragedy.

Our refusal to create gun reforms is partially due to the considerable gun lobby in the United States. One of the largest organizations advocating for gun rights in the world is the National Rifle Association, or NRA. The supposed “non-profit” was created in 1871 by two Civil War Veterans, and was stated to have the purpose of “promoting and encouraging rifle shooting on a scientific basis.” Today, the NRA is one of the most powerful bodies in the world, with somewhere between 3-5 million official members, a lobbying arm, its own political action committee, and a budget of about 250 million dollars a year, according to BBC. This only includes recorded contributions, and does not count individual funding or potential independent contributions. The NRA explains themselves as “the premier firearm education organization” and their mission as to “champion Second Amendment rights and support NRA programs.”

But it’s not as simple as it seems on the surface. The NRA has had much success across the world limiting gun restrictions in many countries. But they don’t have this incredible amount of power in actuality; only in spirit. With a limited number of employees and a failing profit margin, the company itself isn’t booming. But the rhetoric it spreads around the world of citizens having rights to carry guns without government intervention is dangerous in an unexpected way. Similar organizations in Central and South America fight for open carrying and other hands-off gun policies without officially being branches of the NRA. But with both ad content and overall goals they are strikingly similar. Jair Bolsonaro, the president of Brazil, displayed NRA posters and gun paraphernalia in his home after issuing decrees creating looser and looser gun laws, even allowing for semi-automatic rifles to be carried openly and legally. Between 2007 and 2019, more than 179,000 firearms were captured in Mexico and five Central American countries and traced to gun shops and gun factories in the United States.  In fact, most of Central America’s illegal guns come from the U.S.’s legal gun market of almost 400 million firearms in civilian hands. Arms trafficking and smuggling leads to these arms finding their way into the hands of gangs in Mexico, Honduras, and countless other nations, where they don’t have to be raided due to pro-gun, NRA-affiliated presidents. There are many factors that lead to people being driven from their homes in Central America, but guns and gang violence is a primary cause. While guns moving south cause refugees to flow north, the same organizations and politicians that so openly support the freedom to carry arms without regulation are just as quick to denounce these immigrants as violent and riddled with drugs. This system has created a vicious cycle of gun violence throughout North America and has similar counterparts involving the United States all over the globe.

It’s almost like a situation you would read about in a horrifying dystopian novel. And regardless of what many sensationalists might think, we are not living in a dystopian society. Our Constitution was created in order to protect a free, fair, and safe democracy. The Bill of Rights was added on to such an ambitious document to guarantee that this system would function correctly. As someone who observes these events occurring in America, ask yourself this: the writers of this document 246 years ago in principle believed that these ten amendments to the Constitution would protect our freedom, equality, and safety. But time always marches on; what may have suited colonists searching for representation and security in the 18th century is not going to be an identical policy to 21st century problems. No ratifier of the second amendment could have predicted that assault rifles and semi-automatic weapons would later be developed. The Revolutionary War era muskets with single shots and small bayonets are a far cry from the AR-15s capable of killing dozens in seconds.

It’s not even a question of whether someone considers it justifiable to commit these atrocities. The right granted by “the people to keep and bear arms” was written under the context that such an event would not be able to occur, so why are we as Americans so obsessed with following the exact wording of a document nearly two and a half centuries old? Rights are granted in spirit, not actuality. The de jure meaning of the 2nd amendment may be that firearms are able to be owned and carried by civilians, but the de facto meaning was proposed originally to guarantee the safety of the citizens of the United States. And right now, our adamant refusal to roll back gun reforms based on this over rationalized clause is directly conflicting with its original intention. By allowing American civilians to purchase firearms with extremely dangerous potential, we are literally contradicting the message of this social contract by allowing harm to occur by some people, for all the people involved.

So then why are we still stuck on these laws? These unspeakable events keep happening, and we still listen to organizations like the NRA over the voices of our own people crying out for change. Encanto teaches us something else besides the tragic story of Ellie Garcia: that “we the people are so afraid of change, in a world that never stops changing.”

What are some more recent shootings? How were they caused? And what possibly could fix this broken system? Stay tuned for an update next week.