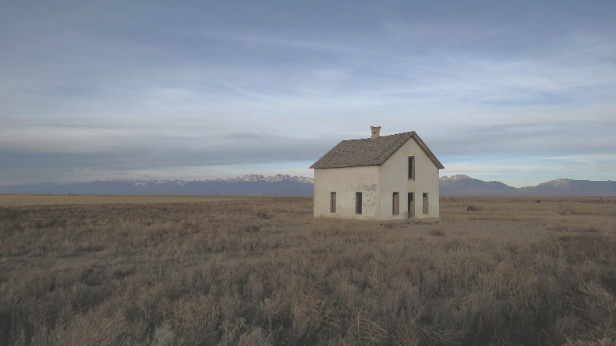 The girl kicks the tumbleweed away from herself in exasperation and begins running towards some imaginary place in the distance. After some time, the girl pauses to look back behind her. The terrain looks the same to her. For all she knows, she has not moved an inch from the position she had been standing in moments ago.

“FINE,” the girl yells, “don’t tell me where I am or where you are. Just tell me how to get out!”

A booming laughter echoes through the air. The girl feels a force begin to drag her backwards across the sand. A slight breeze has picked up and her hair blows wildly around her face. She attempts to step forward, away from that strange force, but she only trips over her feet and falls to the ground. Her hands grab feverishly for something to grab on to, but she only succeeds in scooping up large handfuls of sand.

Suddenly, the soles of her shoes thud against a wall behind her. The force of hitting the wall runs through her body. Slowly she rises to her feet. She feels a bit light headed and she wobbles around as though she were walking on a tightrope. The girl looks up, shielding her eyes from the bright light of the sun.

In front of her, is a pleasant little house made with stones in different shades of brown. It has seven rectangular windows and a bright red door. Ivy climbs up the side and smoke is pouring out of the chimney. “Why on earth would someone have a fire going in this heat?” wonders the girl as she walks up the two steps which lead up to the door. Knocking on the door, the girl waits while her foot taps out a rhythm on the ground. There is noise from inside the house and the door swings open.

The girl extends her hand and begins to introduce herself when she realizes that no one is behind the door. Walking inside, the girl’s eyes inspect and scrutinize every small detail of the house. Needles of fear poke at her pounding heart. From a room in the back of the house, there is a steady creaking noise. Slowly the girl walks towards it. As every second passes she regrets her choice to enter the house more and more, but what else would she have done? Lie in the desert until she wasted away into skull and bones?

The creaking stops. The girl holds her breath as she peaks into the room.

An old woman with a poodle sitting in her lap glances up at her, “Sit darling. Sit down why don’tcha?”

The room is filled by an old chestnut bookcase against the left wall, four velvet red chairs facing each other on the right with a tattered braided rug in the center, and a large window with sunlight shining through it. There is a fireplace on the wall directly across from the old lady who sits in one of the chairs with her feet up on a pile of old newspapers. Just as the girl is about to sit down in the chair directly across from the old woman, the dog yelps, leaps into it, and curls up into a tight ball with his teeth bared. The girl is surprised, but quickly rushes to the next chair, the one on the old woman’s left, before the dog can steal it.

“Are you hungry? You seem hungry. Let me go get you some food,” the old woman rose from her seat. Her dog lifts its head, but she shakes her head at him and he settles back into the chair. She lumbers out of the room towards the kitchen that the girl could just see if she tilts her head to the right.

So, for a few minutes, the girl just sits there with the dog, basking in the glorious sunlight. The girl has become quite weary and she tries with all her might not to lean against the back of the chair and close her eyes. The dog keeps his head turned away from the girl for the majority of the time as though in disgust, but curiosity gets the best of him in the end, and he turns around to watch her.

At last, the old woman walks back into the room with a bowl filled to the brim by a thick stew of some sort. Holding the bowl out to the girl, the woman maneuvers her way back to her seat. The girl eagerly accepts the bowl and begins to devour it with the spoon. With the bowl empty, the girl turns to the girl and thanks her. The old woman nods and then lies back into her chair and looks at the girl as though she is expecting something.

Hoping for a decent answer at last, the girl turns the old woman with pleading eyes and asks, “Where are we?”

“We are here, in my house, and you are there in that chair and I am here in this chair.”

“O.K., but where is this house located?”

“This house. Well, this house is located… why do you ask?.”

“I just wanted to check to see if you knew where we were,” the girl realized that this would be more difficult than she had expected. Her heart began to sink in her chest.

“I’m not that old! I know where we are! We, we are in…”
“We are in ROGAS,” a new voice spoke up. The girl looked around the room startled. Her eyes, at last, fell upon the dog who was scratching his neck with his back paw.

“Excuse me?” the girl asked.

“I said we are in ROGAS,” the dog sat up in the chair.

“Are you speaking?” the girl stared at the dog. The dog’s head bobbed up and down slowly. Then he hopped off the chair and began to walk off to another part of the house. The girl replayed the dog’s voice in her head. It sounded familiar.

“Wait!” the girl called out to the dog. The dog turned around and stared at the girl annoyed. “Are you that voice”

“You have to be more clear, dear,” the old woman called out to the girl.

The girl paused, “That voice I heard when I first arrived?” There was that same booming laughter. The dog grinned at her and strolled away with his head held high.