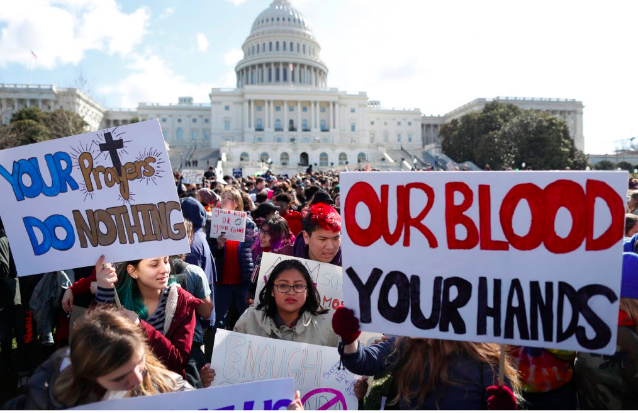 It was the Thursday before winter break at Bloomfield Hills High School and the halls were brimming with excitement as students were ready for winter break. Then, horror struck when a false alarm alerted students of a possible active shooter situation and chaos ensued. What resulted was a 60+ officer federal, state, and local police response that made us all, once more sadly reconsider how safe we are in our own schools. Shaking. Unreal. Shocking. Those are the words of one BHHS student as he recalled the experience, one which is yet just another reminder between endless lockdown drills and monthly news reports of our nation’s inability to confront its gun problem.

Columbine (15 killed), Virginia Tech (32), Sandy Hook (26), Orlando (49), Las Vegas (59), Marjory Stoneman Douglas (17) among far too many others. These are the stories etched into our nation’s psyche. The places where politicians feign concern, give thoughts and prayers, and then quietly move on continuing to accept money from the NRA. But they are far from the only stories when each year nearly 40,000 Americans die due to either suicide involving a firearm (60%) or gun homicides (40%). What’s left behind is hardly ever covered, it’s the hearts broken, families parted, and trauma that will live on for decades.

In the wake of every mass shooting, the gun lobby claims to be saddened and then attempts to minimize the issue with the ignorant over-simplistic retort that guns don’t kill people, people do. But that does nothing to address the fact that guns make it substantially easier to kill people. That is the reason why guns are responsible for half of all suicide deaths but only a tenth of attempts. Or the reason why three-quarters of homicides are committed using a firearm. It’s the lethality of a firearm that takes away a disturbed person’s barriers to killing and amplifies their worst impulses. Another common retort of the NRA is that a good guy with a gun would stop a bad guy with a gun. But in the only country in the world where there are more guns than people (followed distantly by Yemen), I’m yet to see all the good guys with guns we’ve been promised. All I see are the results of bad guys having guns only to be stopped far too late. Across high-income nations and even between states, the correlation is the same: where there are more guns, there are more homicides. And even if the purported good guy with a gun stopped a bad guy with a gun, is that what we want? Do we really want our streets and schools to be transformed into a western that inducts our teachers to duel against a deranged person who never should have had a gun to begin with? A gun he only had because the lives that would be saved by common sense laws are deemed second to “convenience.”

Shrewdly, the NRA will try to paint the gun control debate into a binary choice: that you can have guns or no guns at all. However, this is false and ignores the multi-faceted solutions needed to combat such a complex issue. Additionally, they erroneously claim that there is no evidence to support gun control. But this is also false, as the data clearly shows that the top 10 states with the highest homicide rate all 10 have some of the weakest gun laws. Gun control saves countless lives and by taking swift action we can finally say, once and for all, “Never Again” all while maintaining law-abiding Americans’ Second Amendment rights.

Other common-sense solutions include the implementation of waiting periods and licensing which are also supported by data. And if you think about it, it makes sense: by delaying the purchase of a firearm by just a couple days, someone isn’t given the instantaneous opportunity to commit a crime of passion or to commit suicide based on a short term condition. One study found that waiting periods reduce homicides by 17% and suicides by 7-11%. Furthermore, licensing has shown to be another effective means not only in preventing fraud but in preventing more senseless deaths. This also makes sense because a future criminal or withdrawn person in crisis might be reluctant to walk into a police station to obtain a permit while any sound-minded citizens would have no such reservations. In practice, this has been proven in Connecticut where licensing laws have reduced its firearm homicides by 40% and suicides by 15%. On the contrary, when Missouri eliminated its licensing laws, it’s firearm homicide rate increased by 25% and its suicide rate by 16%. Overall, both fact and theory have proven that licensing and waiting periods are common-sense approaches to preventing carnage without restricting who is able to purchase a firearm.

In addition to government, communities also must play a role in preventing gun violence. That is why red flag laws are so important. They empower family members, coworkers, school administrators, and law enforcement to proactively assess a threat and act on it. While it is impossible to say how many lives these laws save, there have been countless cases that show how unsettlingly close we’ve gotten to tragedy if not for early intervention. These laws work because before committing their horrible crimes, active shooters generally display multiple warning signs of what they intend to do. But in the majority of these instances, people who noticed some of the signs, knowing the lack of recourse, never reported it. Or when they did speak, the authorities were powerless to do anything as in the case of the deeply disturbed Parkland shooter who displayed multiple warning signs and was unfit to possess a firearm. By providing a judicial means to take away the guns and an avenue for people to speak up, we can begin to prevent tragedy and not react to it.

Any combination of these proposed measures would make a significant difference in alleviating the homicide and suicide epidemics that plague our nation.  However, nothing will happen unless we vote out those who stay silent when tens of thousands of Americans die in vain. Because if the tragedy of 40,000 Americans each year, or the slaughter of dozens of children in our schools, or the deaths of 6 people in a Milwaukee brewery does nothing, why should ours? Many nations have been faced with and have triumphed over similar sets of circumstances. Britain acted, Australia acted, Japan acted, New Zealand acted, why haven’t we? Why not US?