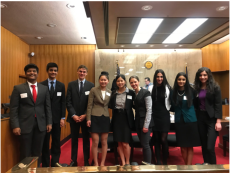 The International Academy’s Mock Trial Teams competed at the regional competition at the Oakland County Courthouse on February 29th. Mock Trial is a competition where teams are divided into lawyers and witnesses. All the teams receive a court case and prepare an argument for the competition. At the courthouse, our school’s teams go against different schools and try to win the case.

“I joined the Mock Trial team not knowing much about the court system, and left with new friends, experiences, and  desire to learn more about the law.” -Shannon Schulte ‘22

This year, the case was on the asylum-seeking Quin Zion from a fake country named Freedonia. He had been a member of the Spree Party and came to the United States on a student visa. However, the change of government to the Knave Party caused concerns for many Spree Party members. There were stories circulating of Knave Party radicals who terrorized the homes of the Spree, including Quin Zion’s family. Hearing that terrible things could happen to him if he were to return, he applied for asylum under the persecution of political and religious beliefs. However, the asylum officer Jules Leonard declined her application for several reasons: canceled the first meeting and late to the second meeting, did not show any emotion during the interview, and had possibly participated in former persecution. These reasons would automatically disqualify Quin Zion from receiving asylum under the United States laws.

The teams were divided into two parts: the respondent and the government. The respondent’s side was responsible for defending Quin Zion’s case and fighting for approval for asylum. The government’s side was responsible to find evidence that Quin Zion was not eligible for asylum. At first, the teams thought that it was obvious to state that there was too much evidence against Quin Zion.

But as the team met every week at school and at the library over Christmas and mid-winter break, the team was able to come up with strong theories and themes for their respective sides. As one of the board members of the club, it was great to see the team come together, students from all grades, through these meetings and grow closer as a team. We learned a lot together this year by attending a clinic hosted by the organization. The hard work that each individual person put into this team brought us a lot of praise from judges and parents. The Junior Varsity team was able to secure honorable mention for the International Academy, a second award for the school.

We are very proud of this year’s team, and we can’t wait for a better season next year!

“I’m really glad I got into Mock Trial; it really provided a different kind of atmosphere and experience, especially for someone like me who wasn’t really comfortable with public speaking and on-the-spot thinking, but Mock Trial may have changed that.” -Ryan Jin ‘22