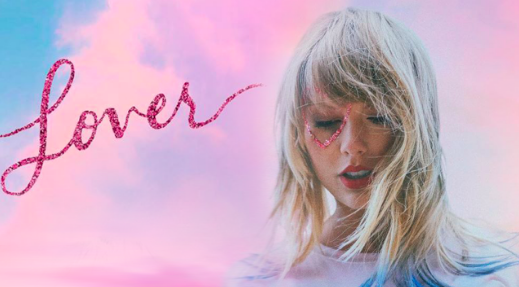 Taylor Swift is a 29-year-old American singer and songwriter born in Reading, Pennsylvania. Her music career began in 2006 when she released her first album, Taylor Swift, which quickly became the longest-charting album of the 2000s. In 2012, Swift released Red and in 2014 she released 1989. Both albums were instant successes and yielded notable songs like “Bad Blood” and “I Knew You Were Trouble.” In 2017, Taylor Swift released Reputation. After the release of Reputation, Swift became the first singer to have four albums sell one million copies within one week. Finally, in 2019, Swift released Lover. After selling 50 million albums, receiving 10 grammy awards and 23 Billboard Music Awards, it is impossible to deny Taylor Swift’s impact and influence on the music industry.

The album is packed with romance, heartbreak and political references. However, first and foremost, Lover is a pop album. Having created six pop/country albums, Lover being her seventh, Swift strives to provide her listeners with fresh music, and in some cases she achieves this goal. “Lover” is a great example of Swift’s new maturity working its way into her tracks. In “Lover”, Swift’s vocal performance is dreamy, light and exceptionally high. This is combined with syncopated singing and a bass guitar. The combination lends itself to a beautiful, romantic slow song.  Additionally, “London Boy” is a notable song on the album. In “London Boy”, Swift vivaciously sings about her boyfriend Joe Alwyn, who is British. This ballad is underscored by an electronic and peppy beat. Finally the tenth song on the album is also extremely interesting. In “Death by a Thousand Cuts”, Swift dramatically sings her way through twinkly instrumentation, that sounds simultaneously sad and happy. These conflicting emotions are best displayed through the lyrics, “I look through the windows of this love / Even though we boarded them up.”

Although Lover contains some great songs, there are just as many flops. The album begins with two songs that perfectly demonstrate the unoriginal and plain nature of parts of her album. “I Forgot That You Existed” is bright and fun but lacks actual singing. Instead, Swift squeakily talks her way through the song. With a few snaps here and there and a simple piano melody, “I Forgot That You Existed” is so boring, many of her listeners may have forgotten it existed. “Cruel Summer”, the second song on Lover, parallels many of the songs off of Red and 1989: it is a pop song with hints of country twang and it has simple lyrics. This format is catchy and foolproof, but it also has already been done before. Finally, one of the most popular songs on the album, “ME! (feat. Brendon Urie)”, is a triumphant and powerful song of self-love and although the message is great, the simplicity of the lyrics and the almost in-genuine happiness makes the song feel animated and childish.

Dissimilar to previous albums, in Lover, Swift uses her songs as a vehicle for expressing her political opinions. This is seen in the song “You Need To Calm Down”. “YNTCD” is a spirited declaration for the advocacy of the LGBTQ+ community. She explains that the community will inevitably be allowed to express their true selves and recieve equal treatment no matter what anyone says. This is best expressed through the lyrics “. . . Shade never made anybody less gay . . .” Furthermore, the fourth song on the album also conveys strong political messages regarding the unequal treatment of men and women. In “The Man”, a dreamy, pop song, Swift speaks for all women when she says that if she were a man, she would have it much easier.

In addition to the songs mentioned above, listed below are some honorable mentions that contribute to the album’s memorability: “Miss Americana and the Heartbreak Prince” and “Paper Rings”
Taylor Swift has grown from a teenage country singer to a mature adult who is able to use her songs to tell stories that she is truly passionate about. The principal feature of Lover is its ability to light-heartedly handle controversial topics and seamlessly tell stories of heartbreak and romance. However, some songs on the album are too elementary for Swift’s seventh body of work, which should contain tracks that reflect her skill level. Lover starkly contrasts her previous album Reputation which was full of vengeance and arrogance. Instead, this album is bubbly, peppy, and whimsical, which her listeners may find refreshing. Overall, Lover is a reflection of years of hard work and experience however sometimes it shows and sometimes it doesn’t.