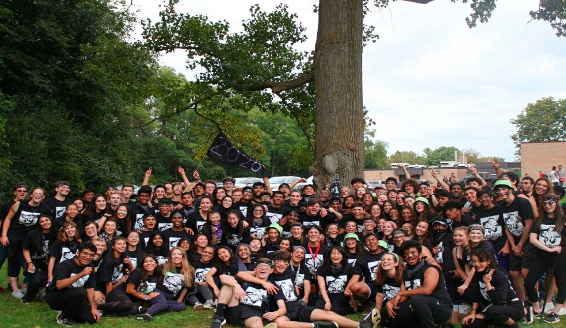 Every four years, many of us eagerly sit down with our friends and family to watch the Olympic Games, the international sports competition. The series of seasonal, competitive sports that thousands of athletes across the world compete in can be traced back as early as 8 B.C in Olympia, Greece, as a form of celebrating Zeus, and the first modern Olympic Games can be seen as early as 1896.

The International Academy has made a little twist on this traditional event by creating our own Olympics that happens at the beginning of every school year. We kick off with a spirit week that consists of 5 differently themed days, and throughout the week you can see the hallways filled with many different creative costumes that fit the themes. One of the most awaited traditions is Car Night, where all grades stay after school to decorate their hallways and build a cardboard car that will be raced the following day, both of which are styled around a theme chosen by each grade. The hallways would then be judged by parent volunteers the next morning. Each grade also paints a banner based on their team that is also judged by parents the following day. On Friday, the seniors, as per tradition, crowd outside in the parking lot to cheer on their class and set the tone for the day. The seniors also crowd in the Hexagon during passing time to shout their class chants, enjoying their last year of Olympics. After our shortened classes, everyone piles into the ISC to eat lunch, quickly followed by an entrance prepared by every grade. The final one, by the seniors, is a tradition for years, which includes a dance, skit, and chant.

This year, Olympics started off with spirit week consisting of pajama day, seasons day, 80s cliche day, blackout day, and finally class shirt/color and Olympics on Friday. All of the grades participated to win points for their grade and in the end, the seniors won significantly. Also, as per our parent-judges’ opinions, the seniors won the hallway competition with their blacked-out Maleficent themed throne and evil forest. The throne in the Hexagon was accompanied by a mighty dragon’s head. On Olympics, the seniors made their debut in the parking lot bright and early around 7:00 am to begin chanting and yelling their classmates on. As the second half of the day began, we got to see each grade’s spectacular entrances that led up to the seniors’ big entrance of the year, which consisted of a dance, skit, and all the seniors chanting ready to begin the fun festivities!

Olympics this year consisted of a range of events from Quizbowl to ninja to Jenga to human foosball to basketball and so many more. The afternoon events began with the watermelon eating contest, to which the juniors took home the victory, closely followed by the seniors! Afterward, everyone gathered near the middle of the field to watch some of the annual events such as egg toss, four-legged race, tug of war, and the long-awaited car race. Everyone was constantly cheering on their class and the competitiveness added a hint of spice to all the events, which everyone embraced. The scoreboard tallied the scores up, and the winners of Olympics were the seniors, followed by the juniors, then the sophomores, and in fourth place, the freshmen. The seniors closed off Olympics by taking their victory lap around the field, marking the end of their final Olympics at IA.