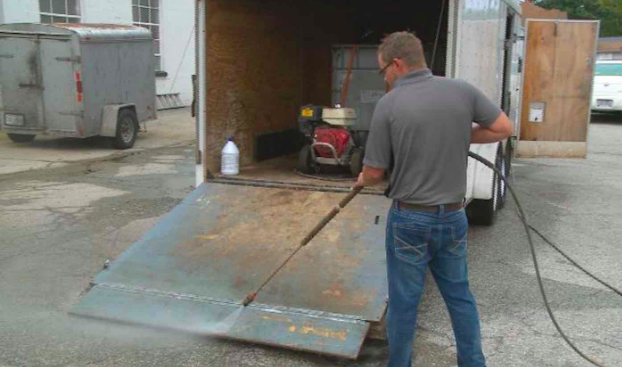 Around five months ago, Dennis Bonifan attempted to commit suicide. However, he has recently found a source of release and aid: graffiti. Graffiti is a unique, new kind of therapy that has greatly impacted the life of Bonifan, who is no longer in danger of death. In fact, he is thriving. However, he is not the one that spray paints the streets of his neighborhood. In fact, he is taking a completely different approach by acting on issues in a way that is meaningful and positive to him: removing racist and hateful artwork off of walls and property that seep through his city. Volunteering time and resources first crossed his mind a few weeks ago at the sight of a Facebook post he came across, discussing how a person had painted serveral Nazi swastikas along a street. Reaching for his power washer, Dennis Bonifan eliminated the graffiti with no charge.

Now, he continues to clean offensive acts painted into the property whenever he has the chance. Bonifan still suffers from schizophrenia and bipolar disorder. Despite these challenges, he continues to hold onto his job as the owner of Swanton Ohio’s B&D Powerwash and Painting Services. He reported to WTVG that “It’s very rewarding to be able to do something and then put a smile on my face … it actually helps my mood a lot.” He urges those on social media that live in Ohio to get in touch with him through the company’s Facebook page if they happen to come across vandalism that should be taken care of.

Amidst the negativity and hate spread throughout our media, we often lose sight of the fact that the bad makes up a fraction of the good. There is more justice than discrimination, more acts of selflessness than greed, more love than hatred. Through the inspiring story of Dennis Bonifan, we can all learn that our purpose in life can be found through perseverance, fair-mindedness, determination, and the subtle acts of heroism we rarely hear about that keep our world a better place.