Recently, Governor Gavin Newsom signed a bill that would let college athletes make money from endorsement deals for the first time. The main conflict in the Fair Pay to Play Act is about who gets the profits from college sports. In college sports today, athletes are the only ones who are not allowed to make any profit that comes from their sport. You would think, with their countless hours building their public image and specializing in their sport, they would get to make at least some of the money they produce for colleges and sports brands. However, the reality is that the players are left penniless.

Over time, college sports have expanded into a multibillion dollar industry. Coaches are earning millions, while athletes are frustrated that they can’t make money from any YouTube channels or endorsements. In fact, the highest-paid head coach in 2018 was Nick Saban, who was paid $8.3 million for coaching for Alabama. The lowest-paid coaches in the SEC are making $1 million, compared to the players who make nothing. Colleges make tons of money too. Cable networks pay them about $50 million a year for broadcast rights, and colleges also maintain multimillion dollar sponsorship deals with various athletic brands. On top of that, employees working in the athletics departments often make six-figure salaries. League coordinators make even more, with Jim Delaney making $5.5 million in 2018, and Mark Emmert making $4 million.

One supporter of the Fair Pay to Play Act is the former UCF football player Donald De La Haye, also known as Deestroying. He maintained a youtube channel, which has over 2 million subscribers today, while kicking for the UFC football team, but was revoked from his scholarship and ruled ineligible to play, because of the money he was making from his videos. He was faced with the grave decision to take down his channel and all its videos, which he used to support his family and pay for school, or stop playing college football as a whole. Even NBA and NFL players who were in the positions of college athletes today are striving to back the bill that they wish they had.

“I’m tired of seeing these college athletes get ripped off,” Draymond Green, forward for the Golden State Warriors.

“Coming from the … just from me and my mom we didn’t have anything. We wouldn’t have been able to benefit at all from it. And the university would have been able to capitalize on everything that I would’ve been there for that year or two or whatever.” – Lebron James 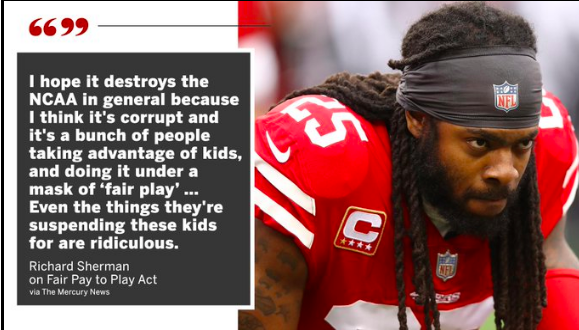 The law, which is set to take effect on Jan. 1, 2023, does not apply to community college and bans athletes from making endorsement deals that conflict with contracts from their school.