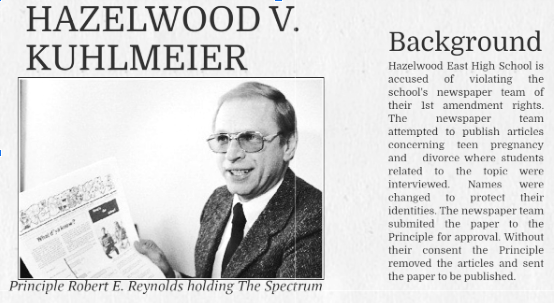 For IA Law Review’s first article, I deemed it fitting that we discuss the landmark Supreme Court case concerning freedom of expression in school newspapers. This case concerns the censorship of a school newspaper, The Spectrum, by Hazelwood East High School. Student journalists were furious when the school censored their articles on divorce and teen pregnancy, claiming that their first amendment rights to expression were violated. The school, on the other hand, claimed that they had the full right to control anything associated with their image as the newspaper is not a public forum, but a private representation of their school.

Initially, the case was filed in the U.S. District Court for the Eastern District of Missouri in May of 1985. The court sided with the school, claiming that schools can restrict speech if they had a “substantial and reasonable basis” that the aforementioned speech could be negative to their image. However, the U.S. Eighth Circuit Court of Appeals reversed the district court’s decision in January 1986, citing that although The Spectrum was related to the school, it was also a public forum and therefore should not be censored.

With the controversial nature of this case and its connection to constitutional law, the Supreme Court granted certiorari in January 1987 and this case was argued in October of that year. The opinion of the court was levied on January 13, 1988 and controversially overturned the circuit court. However, the ruling wasn’t unanimous: 5-3.

The majority opinion, filed by Justice Byron White, put forth that school papers aren’t necessarily public forums and, in this particular case, the Spectrum was actually the school’s “supervised learning experience for journalism students”. Therefore, schools have full authority to modify as they see fit to maintain their school’s mission and image. However, the majority opinion did note the existence of certain caveats. For example, the opinion noted that the ruling didn’t necessarily apply to college newspapers and should be limited to only private forums.

Although the majority did side with the school, the dissenting opinion was strong as well. Written by Justice William J. Brennan Jr., this opinion argued that an educator censoring educational materials was ironic and voiced concern over students’ rights to expression. This dissent was notably joined by Thurgood Marshall, who was an advocate for constitutional liberties.

This case left a long-lasting legacy in regards to students’ first-amendment rights. Based on the precedent set in this case, schools are allowed to censor newspapers, speeches, theatrical productions, and other forms of student expression affiliated with their school. However, an important distinction to make is that schools have little authority over private student-led forms of expression (as long as it doesn’t interfere with the rights of others). Additionally, there have been some spin-off cases primarily concerning the gray area of college newspapers. 1994’s Desilets v. Clearview Regional Board of Education put forth that public newspapers are less protected by the First Amendment in comparison to student-led newspapers while 2005’s Hosty v. Carter stated that schools could censor college newspapers as well.

Onto my interpretation of the case. I believe that the first amendment, particularly the provision relating to freedom of speech, is at the core of this issue in addition to the ongoing public vs. private debate. This case was set within the historical context of the 1980’s (a time of social and cultural change in the United States) and female journalists were frustrated with their inability to voice their opinions in Mississippi which led to this boiling point. I acknowledge and understand the factors that contributed to the decision of each side. On one hand, I understand the majority opinion’s argument that freedom of speech doesn’t necessarily extend to private organizations and that this newspaper was a private project created by the school for their student journalists. Since this project was created by the school and heavily affiliated with the school, it should be their right to censor it as they see fit (especially because teen pregnancy and divorce were sensitive topics in 1980’s Mississippi). However, I also realize that the dissenting opinion is founded in their claim that this violates the students’ right to expression as a newspaper should be a forum to parlay all views, regardless of how unorthodox they may be. Also, the controversial nature of their topics are precisely why these student journalists wanted to share their experience: to combat the stigma. All in all, the controversial nature of the debate has led to two staunch, opposing sides. Both sides have reasonable claims, merited arguments, and precedents in the legal framework of the United States. In my opinion, I believe that the majority opinion had basis in claiming private organizations (like school-run student newspapers) had the right to censor within themselves; however, I acknowledge the dissenting opinion’s claim that this may set a dangerous precedent in terms of student expression as it relates to private organizations.